"I had rather be a doorkeeper in the house of my God, than to dwell in the tents of wickedness." So sang the Psalmist out of the fullness of his heart. David had early experienced the joy and safety of being watchful; for had he not faithfully guarded his father's sheep, protecting them from any and every danger? And what was the direct result of his vigilance and care? It enabled him to go forth, single-handed, to face and triumph over Goliath, who was bringing terror to the army of Saul, threatening it.

David had no use for shield, spear, or buckler in his warfare with the giant: his reliance was placed entirely on the Lord. Indeed, when the king offered to equip the shepherd lad with a full suit of armor to protect him from the onslaught of Goliath, David answered, "I cannot go with these; for I have not proved them." When the haughty Philistine, sure of his victory over the slender youth, boasted in his arrogancy that he would quickly slay him, David's fearless reply was: "Thou comest to me with a sword, and with a spear, and with a shield: but I come to thee in the name of the Lord of hosts.... This day will the Lord deliver thee into mine hand." And we read, "So David prevailed over the Philistine with a sling and with a stone, and smote the Philistine, and slew him; but there was no sword in the hand of David."

Send a comment to the editors
NEXT IN THIS ISSUE
Poem
I Thank Thee, God, That Thou Art All 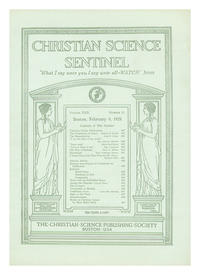