May I have a brief space in your columns to clear up a...

Orwell Bradley Towne, Committee on Publication for the State of New York,—Flushing

May I have a brief space in your columns to clear up a wrong impression given in the column of "Church Notes" published in your recent issue. The statement in a sermon regarding "the healing miracles of Jesus and the cures of Christian Science" indicates that the speaker has not been correctly informed regarding Christian Science healings. The healings of Christian Science are not the result of the influence of the so-called human will upon the sick and the insane, but are the effect of the operation of the power of God, invoked through understanding of the relationship between God and man. Christian Science is based on the words and works of Christ Jesus, who himself summarized the situation clearly when he said, "The Father that dwelleth in me, he doeth the works;" and, again, "Verily, verily, I say unto you, He that believeth on me, the works that I do shall he do also."

The gentle Nazarene was deeply moved by compassion for the sick and the suffering, and his healing work was spiritually accomplished. This was illustrated in the healing of the centurion's servant and the nobleman's son at Capernaum, both of which healings he accomplished at a distance and without his having seen the patients, as the chronicler records. Mrs. Eddy says on pages 476 and 477 of "Science and Health with Key to the Scriptures," the textbook of Christian Science: "Jesus beheld in Science the perfect man, who appeared to him where sinning mortal man appears to mortals. In this perfect man the Saviour saw God's own likeness, and this correct view of man healed the sick." Christian Science healings are spiritually wrought; and in emulation of the "Man of Galilee" Christian Scientists ascribe all power unto God, striving to have that Mind in them "which was also in Christ Jesus." The results speak for themselves.

Send a comment to the editors
NEXT IN THIS ISSUE
Article
Your recent issue contains a synopsis of a sermon... 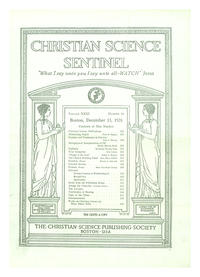