Your recent issue carries a reprint from a periodical...

Aaron E. Brandt, Committee on Publication for the State of Pennsylavania,

Your recent issue carries a reprint from a periodical which undertakes to justify an attitude of intolerance toward Christian Scientists and others therein named who differ from its religious views. What is stranger still, it attempts to do so on the ground that a different attitude would be contrary to the teachings of Christ Jesus. May I say, therefore, that in my study of Christian Science covering a score of years and upwards, I have not found anything in its teaching or practice which is not in full accord with that of Christ Jesus. Those who understand Christian Science realize that throughout it is a logical deduction from his and other Bible teaching. It is for this very reason that people of all denominations have found it possible to accept Christian Science, and are deriving such spiritual, mortal, and physical benefits therefrom as they never experienced before.

Now of all spiritual teachers Christ Jesus was undoubtedly the most tolerant, and for reasons that emanated from a divine source alone. It is quite certain that he rebuked the disciples who attempted to interfere with those who did not follow them. The test of true discipleship was given by Jesus for all mankind and for all time when he declared, "By their fruits ye shall know them." Christian Scientists are trying to meet this test in the same tolerant spirit which caused Mrs. Eddy to write in "Science and Health with Key to the Scriptures" (p. 444), "Students are advised by the author to be charitable and kind, not only towards differing forms of religion and medicine, but to those who hold these differing opinions." Intolerance is not one of the peaceful fruits of the Spirit enumerated by Paul. On the contrary, it was responsible for some of the bloodiest wars in history, and the torture of the early Christian martyrs. Intolerance and ignorance of God are kindred evils. They, more than anything else, are to-day hindering recognition of the universal brotherhood of man. Certainly intolerance will not bring humanity into a realization of the universal fatherhood of God as Love.

Send a comment to the editors
NEXT IN THIS ISSUE
Article
At the opening ceremony of the Palestine in Macclesfield... 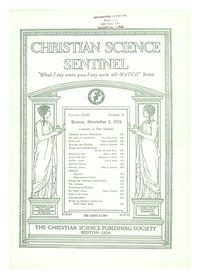