We have had many beautiful proofs of the all-presence...

We have had many beautiful proofs of the all-presence and all-power of God in our home during the past nine or ten years. My desire to express love and gratitude to God, to Christ Jesus, our Way-shower, and to Mrs. Eddy, whose purity and unswerving devotion to Truth gave us Christian Science, leads me to share the following experience with others.

Several years ago I awakened one morning unable to arise. My husband called a Christian Science practitioner, who, after being told the symptoms of the case, suggested that a physician be called, as an epidemic was then prevalent. A physician was called and his diagnosis brought the verdict of black smallpox. That was the only visit he made. In obedience to the city health authorities, the necessary steps were taken in submitting to quarantine. One of our children came down under the appearance of the same trouble, but was quickly healed. He was up and perfectly free within a week. In my own case, every material law was broken that had been laid down by the physician and by a large number of people in the same apartment house who were opposed to Christian Science. We had no nurse, my husband and the maid giving me all the attention I required. I think the most outstanding memory I have of the experience, is the love, joyousness, and thanksgiving to God constantly manifested in the home. Hymns were sung much of the time, resulting in greater freedom. The loving, faithful practitioner's work was of necessity done absently, again proving that "space is no obstacle to Mind," as Mrs. Eddy says on page 179 of "Science and Health with Key to the Scriptures." The children, though living practically in one room for many weeks, were as rosy-cheeked, happy, and normal as before the experience. They had been conscious only of the presence of God, good, rather than of mortal error.

Send a comment to the editors
NEXT IN THIS ISSUE
Testimony of Healing
With great gratitude I too wish to give my testimony of... 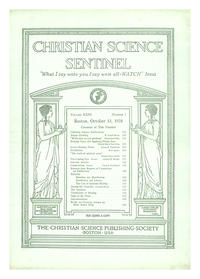