The study of Christian Science brings a continual unfoldment of good. Every student will recall many occasions when, while reading the Bible or our Leader's writings, a passage or verse has stood out with greater clarity than before, or with a meaning quite different from any he had previously attached to it. During the reading of the Lesson-Sermon one Sunday, the closing words of a paragraph on page 365 of "Science and Health with Key to the Scriptures" by Mary Baker Eddy, referring to the requisites for healing, "The result will correspond with the spiritual intent," struck home very forcibly to one of the listeners.

For two or three days this student had been struggling against the belief of a cold in her throat, and her efforts to get rid of it did not seem to be meeting with much success. As she heard the words quoted above, it flashed across her thought why little healing had resulted. Although she had tried to realize and declare the truth faithfully, there had been lack of the right "spiritual intent." She realized that her predominant thought had been to get rid of the claim before it manifested itself as a cold in her head; in other words, she was making use of Truth for her own comfort. This made her consider very carefully what should be the motive governing thought when dealing with error. Clearly, the "spiritual intent" should be the desire to show forth God's glory, to know and manifest more of Him, and not to accept error as any part of His creation. 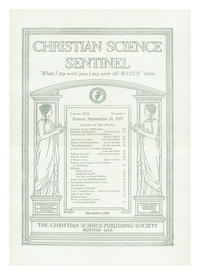