It is misleading for a doctor to state, as he did in your...

Fred Yould, Committee on Publication for the State of Georgia,

It is misleading for a doctor to state, as he did in your recent issue, that "the Christian Scientist says that Jesus' was the ideal spiritual life, but that he never existed as a real mortal man." Therefore I request that you publish the following statement, that your readers may be correctly informed of the teachings of Christian Science in regard to Christ Jesus. Christian Scientists would not be loyal followers of Jesus did they deny his human existence, which would, in effect, also deny that which they genuinely love, that is, the record of the Master's earthly life-work as given in the New Testament. Christian Science is founded squarely on the Bible, and its adherents, doing more than merely claiming the Messiah as their personal Saviour and Way-shower in doctrinal belief, strive daily to obey his commands, not in word only, but by doing the works he demanded all mankind should do. Jesus was the human man and his spiritual nature was the Christ, the only begotten of the Father, even that divine nature to which he referred when he said, "Before Abraham was, I am." Jesus was inseparable from the Christ; and Christ is ever near and dear, even that divine influence which was present when Moses led the children of Israel out of the wilderness, and when Peter and John cured the man lame from birth at the temple gate called Beautiful. On another occasion when referring to his spiritual selfhood, the Master said, "Lo, I am with you alway, even unto the end of the world."

It is a proud self-righteousness—such as prompted the Pharisee to exclaim, "I thank thee, that I am not as other men, ... even as this publican"—which impels critics to infer that Christian Science is not Christian. It was the expressed purpose of Jesus to teach men that true Christianity consisted not alone in form, but in doing the works as he did; not alone in outward observance, but in inward purity of spiritual thinking. Christian Science is built upon and practiced from this basis.

Send a comment to the editors
NEXT IN THIS ISSUE
Article
In a recent edition of your paper appears an article entitled... 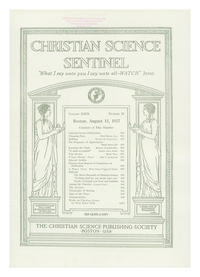