A correspondent has made a friendly allusion to Christian Science...

A correspondent has made a friendly allusion to Christian Science, generously admitting its value and success. She has, however, in her summing up of the purport of three letters by other correspondents, given an incorrect impression, by identifying Christian Science with optimism and faith, with will-power and the influence of mind over the material organism.

May I be allowed to explain that these are not, as the critic apparently believes, the fundamentals of Christian Science; nor does Christian Science teach that "the power behind the will-power is the Christ." On page 194 of the Christian Science textbook, "Science and Health with Key to the Scriptures" by Mary Baker Eddy, the author says that "the might of omnipotent Spirit shares not its strength with matter or with human will." And on page 445 we read, "Christian Science silences human will, quiets fear with Truth and Love, and illustrates the unlabored motion of the divine energy in healing the sick."

Send a comment to the editors
NEXT IN THIS ISSUE
Article
The Holy Bible tells us that Job was sorely afflicted with... 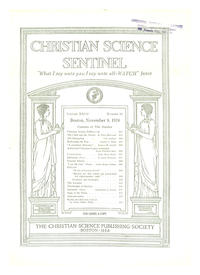