A writer in a recent issue of your paper quotes from...

A writer in a recent issue of your paper quotes from page 5 of "Science and Health with Key to the Scriptures" by Mary Baker Eddy: "Sorrow for wrong-doing is but one step towards reform and the very easiest step. The next and great step required by wisdom is the test of our sincerity,—namely, reformation. To this end we are placed under the stress of circumstances. Temptation bids us repeat the offence, and woe comes in return for what is done. So it will ever be, till we learn that there is no discount in the law of justice and that wemust must pay 'the uttermost farthing.'" Apparently your contributor has a wrong impression of the meaning of this quotation, for he seems to have used it as a basis for considering reformation as a psychological process. Reformation, as understood in Christian Science, is not brought about by the operation of the human will, but by the substitution in the consciousness of the individual of the Mind of Christ in place of the carnal mind or human will. The carnal mind, always at enmity with God, is ever placing before the individual the temptation to sin,—the temptation to do that which is not inspired of God. To reform, the individual must turn away from the temptations of the carnal mind and seek protection in the understanding of divine Mind. Often the individual is weak, and cannot of his own volition resist the temptation to yield to the suggestions of the carnal mind; and thus he becomes a victim of wrongdoing. While his ultimate salvation is in learning that true happiness, real pleasure, and joy exist only in acquaintance with and the desire to do the will of God, it is sometimes desirable and perhaps necessary that, while learning the ultimate lesson that good is the only thing really worth while, he be placed in a position where his surroundings will prevent his coming into contact with the forces of evil against which seemingly he is unable to cope. To this end the restriction of what he has been prone to call his liberty may prove to him a blessing, from which he may learn that true liberty is to be found only in right thinking.

How to gain the liberty of right thinking is the paramount problem before every individual. Jesus said, "Ye shall know the truth, and the truth shall make you free." Jesus taught the truth concerning God and man. Hence it is the truth concerning God and man which makes one free,—in other words, which sets him at liberty from the bondage of wrong thinking, and gives to him the liberty which is his birthright, the liberty of the sons of God. Human will-power can never give to any one this freedom; for human will-power is capable of committing evil; and nothing which is capable of committing evil can ever be wholly relied upon. But the power of God, which Jesus understood and demonstrated, can be relied upon, and can be understood and utilized by any one who will make the necessary effort.

Send a comment to the editors
NEXT IN THIS ISSUE
Article
In a recent issue of your paper appears an account of the... 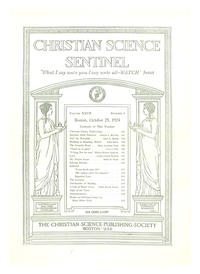