HUMANITY is always struggling to raise itself. Nations have resorted to material warfare, men have braved every hardship and danger, and, too often, have even committed crimes, in order that they might rise in worldly power and personal aggrandizement. Under the false plea that it is business, men lie, cheat, and oppress one another, influenced by the belief that in this material world of supposedly limited supply somebody must go down in order that another may go up.

Very often, if one examine his thought carefully, he finds that, humanly speaking, while he is thinking of being lifted up, it is in comparison and competition with his fellows, whom he is to leave behind and, sometimes, even stand upon in his would-be upward struggle. Even in intellectual, moral, and religious activity, this wrong sense of competition for superiority over other persons sometimes finds an entrance, as it did in the days of Jesus, who uncovered this phase of evil when he rebuked the Pharisees for their tyranny, false pride, and self-righteousness. To be raised by material methods and means for the satisfaction of personal ambition is not really to be lifted up at all; for such supposed upraising is like that of the one who built his house upon the sand (shifting mortal belief),—its reward is destruction. Paul, writing to the Galatians, warned them against "emulations" and "strife," or a sense of competition. In "Science and Health with Key to the Scriptures" (p. 239) Mary Baker Eddy writes, "Let it be understood that success in error is defeat in Truth." 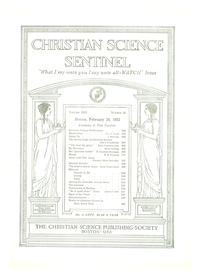