Few passages of Scripture are more often quoted than this: "Seek ye first the kingdom of God, and his righteousness; and all these things shall be added unto you." Correctly interpreted, the passage is rich with meaning; but its true import may be lost, if the word "first" is overemphasized. If we believe that our proper attitude is to seek God's kingdom and His righteousness before we seek other things, and that these other things—material things—will then come to us as a natural and legitimate reward for having given God the preference, we are in error. So-called orthodox religion sanctions this interpretation, because it fails to discern the real meaning of the Scriptural passage. Outside of Christian Science, the belief is all too general that if one strives to be good, this striving will be rewarded materially, notwithstanding that countless instances could be cited where individuals who strove earnestly and sincerely to live upright, pure, and holy lives seem to have received, in return for these efforts, suffering, sickness, and even want.

In the passage quoted, the word "first" does not seem to be an essential part of the Scriptural text. Luke omitted it entirely in reporting the same statement of the Master. His account of Jesus' words was as follows: "But rather seek ye the kingdom of God; and all these things shall be added unto you." The omission is not without significance, and is easily understood in the light of Christian Science, which reveals that there is but one kingdom, the kingdom of God. In it is no evil, sickness, want, or inharmony of any kind. That kingdom contains in itself all that exists in reality. Matter and its claims to reality and substance are a direct contradiction of the allness of God and His kingdom. Not a single quality of matter exists in the realm of God; and there is no other realm or region; therefore there is no place for matter to exist. Matter, so called, is only a false sense of substance and life; and this inharmonious material sense disappears as the false sense is corrected with the truth. 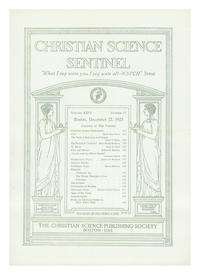