The majority of people who turn to Christian Science are in search of physical healing, or relief from some situation that has baffled all attempts at cure through material means. In other words, in their extremity they turn to God; and "man's extremity" is proved to be "God's opportunity." When the so-called incurable disease, or the seemingly desperate condition has yielded, the seeker's joy and gratitude are apt to be in proportion to the benefit received: the deeper and darker his former misery, the greater is his joy at being awakened to the sunlight of Truth. He is so happy that Christian Science has done this wonderful thing for him that he desires to learn more about it. Possessing as yet a zeal "not according to knowledge," also being ambitious and perhaps active in imagination, he paints a brilliant future for himself under the spur and help provided by Christian Science. So he begins to look for, even to expect, continued demonstration; and he has his eye on some mountain top of achievement as his goal. However, days pass, perhaps months, or even a year or two, and he finds himself apparently no nearer his aim than at the beginning; instead, he may find himself confronted with what seem to be more problems than ever.

He wonders why this is; and, while puzzling over it, he voices his quandary to a friend, who remarks, "Perhaps you have forgotten something." What could he have forgotten? He has attended church regularly; contributed toward its support; studied the Lesson-Sermon daily; testified at the Wednesday evening meetings; and, in fact, conformed to all the outward observances demanded by his beloved Cause. He is sincere in his desire to be obedient to divine Principle; so he picks up the Bible and its Concordance, and looks for hints on what should not be forgotten. The first verse that strikes his eye is, "Bless the Lord, O my soul, and forget not all his benefits." Father on he reads, "In all thy ways acknowledge him;" and in Isaiah he reads, "Who art thou, that ... forgettest the Lord thy maker?" Here he is tempted again to think of his mountain goal; and he turns to the Bible once more and finds that not once, but many times, is mention made of the joy expressed by the hills and mountains; and he also notices the statement that God's blessings "drop upon the pastures of the wilderness: and the little hills rejoice on every side."

Send a comment to the editors
NEXT IN THIS ISSUE
Poem
"Yesterday, and to day, and for ever" 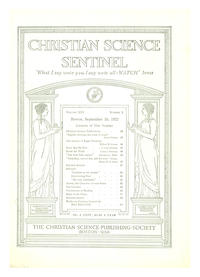