The Crown of Life

Ever since the time when Jesus drove the moneychangers out of the temple, there has been great need to purify thought of all vain traffic, in order to make room for the true worshipers, who worship "in spirit and in truth."

John Bunyan, in "Pilgrim's Progress," described Christian's wife and children traveling over the same road where Christian himself had gained so many victories. While in the "Interpreter's house," they were shown into a room where was a man using a "muck rake," who could look no way but downward. There stood very near him one in white who proffered him a "crown of life" for his muck rake; but the man did nothing but rake up sticks and dirt from the floor, never looking up. He refused to exchange his rags and rake, even for a crown which would dignify and adorn him. We say: What a foolish man! Why did he not look up and obtain the good, instead of looking down and suffering destitution? 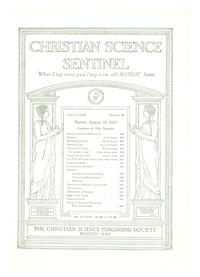