Christian Science was brought to my notice in Switzerland...

Christian Science was brought to my notice in Switzerland at a time when I had been seeking peace and happiness in churches of different creeds and, not finding it, was on the eve of taking up hypnotism. The promises of Christian Science appealed to me; I took up the study and had a healing of eye trouble. I had much discord to meet through criticism, so I came to America hoping to get a better understanding of this blessed truth. Error clung to me and in many a hard struggle I turned temporarily from the truth, but each time through the loving-kindness of some dear friend I would again turn to Truth, and learned at last that God is my Father-Mother.

With the help of a practitioner, I had a most wonderful healing of a serious poisoning of the face and hands, believed to be from the pollen of certain flowers. My face was a mass of festered sores, and my eyes in a badly inflamed condition. The first treatment, which was absent, arrested the belief and I continued to work with the flowers. The condition was overcome in four days. I now know what this verse in the Bible means: "My son, despise not the chastening of the Lord; neither be weary of his correction: for whom the Lord loveth he correcteth; even as a father the son in whom he delighteth." 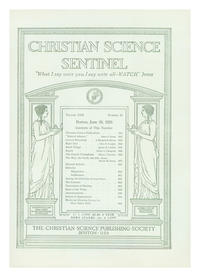