My little daughter nearly eight years of age was suddenly...

My little daughter nearly eight years of age was suddenly thrown down by a huge auto coal truck. She was picked up in an unconscious state and remained thus for days. The hospital physicians and nurses looked after her carefully, but with no hopes of her recovery. She finally did gradually become conscious; then an examination took place by our family physician which resulted in the verdict of concussion of the brain and fracture of the pelvic bone, producing hip joint complications. An X ray was taken of the hip joint, which showed a much higher elevation. This according to medical science would have necessitated weights and pulleys; but knowing that the child was under Christian Science treatment and that Truth makes men every whit whole, I protested against these measures. While the healing was going on, I noticed while visiting the child that both of her eyes were crossed, and that one ear was deaf entirely. The following day the eyes became natural and normal, and the hearing was completely restored. The little girl begged to return home, and on the ninth day it was decided to remove her, and on the tenth she came home under the verdict of being a helpless, hopeless cripple. Work was continued, and on or about the fourteenth day her leg became straight, and three days later, she was perfectly well. In a few more days the owner of the truck came forward and paid all expenses including hospital bill and a new outfit for the little girl, showing God does meet our every human need.

Our gratitude as a family to Christian Science is unbounded. A case of mumps was healed overnight by what understanding I had gained. We have seen other contagious diseases also overcome by the power of Truth. My husband had a healing of an ulcerated tooth. Many other minor conditions were met also.—(Mrs.) Annie Fry, Reading, Pa.

Send a comment to the editors
NEXT IN THIS ISSUE
Testimony of Healing
In March, 1918, I suffered from a severe form of rheumatism... 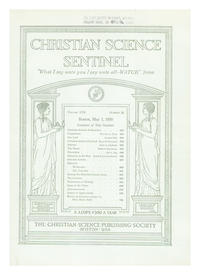