The semiannual recurrence of the Lesson-Sermon on sacrament, with the attendant simplicity of the communion service, always brings to the writer an ever increasing appreciation of Mrs. Eddy's service to humanity in lifting thought from the symbol to the reality, from shadow to substance. The Lord's supper, as it is sometimes called, appears to have indicated to some of the disciples the transition from an old to a new order of things, marked by the substitution of the inanimate bread and wine for the animate sacrifice of the Passover. It is noticeable in all four of the gospels that Jesus scrupulously observed the latter rite. Matthew, Mark, and Luke are almost minute in their detail of his preparation for so doing. Mrs. Eddy discloses Jesus' own attitude toward this observance, when she writes on page 33 of Science and Health, "This supper closed forever Jesus' ritualism or concessions to matter."

It is interesting to note that John disposes of Jesus' final observance of the Passover in two verses (John 13:1, 2); practically in one, for the first verse is devoted principally to emphasizing the Master's love for his followers. It is indicative of this disciple's clearer apprehension of the great Teacher that he alone records the morning meal on the shore of Galilee,—that he alone of the disciples quickly recognized the risen Lord. But it remained for Mrs. Eddy to discern that it was "this spiritual meeting with our Lord" (Science and Health, p. 35), and not the bread and fish, that constituted the morning meal, the true communion. The bread and the fish and the fire of coals were there,—his loving provision for their human need, and possibly his gentle way of avoiding startling them, for they had endured much,—but the ability to see him marked an ascendancy of thought on their part far greater than any they had hitherto known. 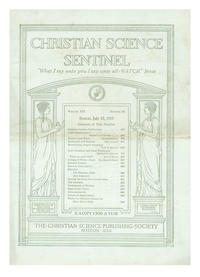