I wish to express my gratitude for my healing from the...

I wish to express my gratitude for my healing from the effects of an automobile accident. On turning a curve in the road the car skidded into a telephone pole, throwing me out into a ditch. I was unable to move, so friends called for an ambulance and I was taken to the hospital. X-ray pictures were taken to locate the injury. It was found that the socket of the thigh bone had been shattered and the bone forced through the pelvic bone, breaking it in four places. The hip was also broken.

To mortal sense it was a very severe accident. I was placed in a cast, and forty pounds of weight were attached to the injured leg. The next day I called a Christian Science practitioner, as the verdict of the doctors was that I would be crippled for life and probably never able to walk again. Hypodermic injections were used to make me sleep, but after Christian Science treatment was begun these were not necessary. I suffered no pain, and there were no signs of inflammation. I ate and slept well, and was bright and cheerful during the six weeks I was in the hospital. The accident occurred on May 21, and the doctors told me I would not be able to be up until the first of the following January; but four months before that time I resumed my position as dental nurse and feel better than before the accident. I have suffered no ill effects, and walk perfectly. My recovery was nothing short of miraculous to every one who knew of my case.

Send a comment to the editors
NEXT IN THIS ISSUE
Testimony of Healing
When my progress in Christian Science seems slow, and... 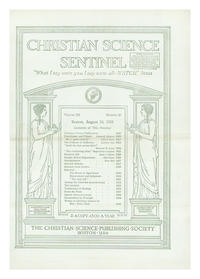