I wish to express my gratitude for the physical healing as...

I wish to express my gratitude for the physical healing as well as for the many other blessings I have received through Christian Science. I took up the study of this teaching about fifteen years ago, when in deep sorrow and very despondent. I had come to a place where I did not feel that I wanted to live any longer. I had been raised in a Christian family, but my understanding was that all my burdens were sent to me by God. At this time a dear friend who was studying Christian Science told me that I was God's child and that He loved and took care of all His children, therefore would take care of me. I was also given a Bible, along with the textbook, "Science and Health with Key to the Scriptures" by Mrs. Eddy, and told to study them. The result was that I was healed of my sorrow, also of a skin disease of ten years' standing which had failed to yield to many different treatments.

Last winter I was called to the country. I had been living in a steam-heated apartment, but in the country I had a room that was not heated. At the end of a week I had a very severe cold, and returned to my city home with all the symptoms of acute lung trouble. The cough was so severe that I had to raise myself up in my bed in order to breathe. A practitioner was asked to treat me, and in a few days I was entirely healed.

Send a comment to the editors
NEXT IN THIS ISSUE
Testimony of Healing
It gives me great pleasure to be able to inform you of... 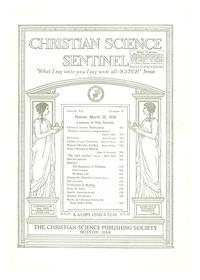