The Press reported a former rabbi's address at a local...

The Press reported a former rabbi's address at a local Bible Conference in which he told of his conversion to Christianity and referred to his experience in Christian Science, the teachings of which, he tells us, he renounced and then "began to preach the gospel of Jesus Christ."

Assuming that the critic's version of his experience in Christian Science was based on fact, it is evident that either he failed to grasp the real import of Mrs. Eddy's teaching as set forth in Science and Health, or, realizing the radical reforms scientific Christianity requires of human thinking, he turned back like many of Jesus' followers, as recorded in the Bible. Certain it is that there is only one way effectively to "preach the gospel of Jesus Christ," and that is to put it into practice in the way that Jesus put it into practice. It was not by what they said that Jesus declared his true followers would be known, but by their works.

Send a comment to the editors
NEXT IN THIS ISSUE
Article
A revivalist is reported to have avowed his belief that ... 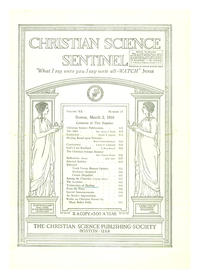