In order to be better prepared to give spiritual help in the Army and Navy through Christian Science literature and in other ways, it is desired to secure the names and present complete mail address of all officers and men in the military, naval, or aero service of the United States and of its allies, who are Christian Scientists or who have shown an interest in Christian Science. Such men, or members of their families, or friends, are requested to send this information to

Send a comment to the editors
NEXT IN THIS ISSUE
Testimony of Healing
At the beginning of the year 1911, when I had reached... 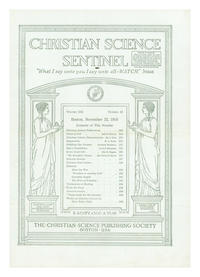