Represa, Cal.—The Folsom State Prison is situated on the bank of the American River at the edge of the foothills, about twenty-three miles northeast of the city of Sacramento. Christian Science services are held there every Sunday morning at 10.30 o'clock. The influence of the work is being felt throughout the prison, and the Readers and local Christian Scientists who frequently accompany them are treated with the greatest kindness and shown every courtesy by the officials.

Much astonishment is expressed among them at the wonderful transformation which has taken place in some who were among the most feared and desperate men in the prison but are now examples to whom the officers frequently refer in the highest terms. Only those who come in personal contact with the work, however, can possibly realize the great good that is being done. This work is being supported by most of the churches and societies outside of San Francisco. At first a per capita tax of five cents was decided upon by the committee. This was subsequently reduced to four cents, and has now been further reduced to three cents beginning May 1, 1918. 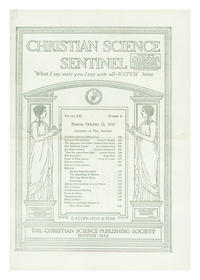