It is by no means an uncommon experience with Christian Scientists to feel that although they are pursuing the study of Christian Science they are seemingly becoming more and more full of faults and less and less agreeable in disposition than they were before. Sometimes this appearance will manifest itself to none but themselves, and sometimes it will be apparent to others. It may therefore be helpful to consider what this experience means, how much it amounts to, and how it is to be dealt with.

It is safe to say that until the individual comes in touch with Christian Science, which goes to the very bottom of mental action, the carnal, or, as Mrs. Eddy has termed it, the mortal mind, goes on its way more or less undisturbed. No system except Christian Science regards it as other than real, that is to say, God-created, or at any rate God-permitted; and though orthodox theology strives to eliminate its more admittedly vicious phases, it regards its less aggressive tendencies as not only real but right. Suddenly, into this placid mill pond of self-satisfaction the rock of Christian Science is hurled, with its declaration that God is infinite Mind, therefore there is but one Mind, and that Mind by its very infinity, spirituality, and goodness not only contains no element of matter or evil but has no consciousness of any such things; hence that matter and evil have neither intelligence nor power nor reality, while the mind that seems conscious of them is itself a falsity. This, it will be seen, is in strict accord with the teaching of the Founder of Christianity, when he said, "It is the spirit that quickeneth; the flesh profiteth nothing," and with his statement regarding the devil, or personified evil, that he "abode not in the truth, because there is no truth in him;" though the world has refused to take these sayings absolutely. 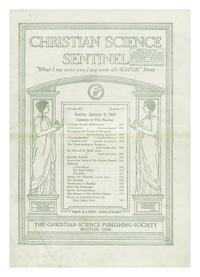