With deep gratitude I try to tell of some of the blessings...

With deep gratitude I try to tell of some of the blessings we have received from Christian Science. Some time ago our little boy had a fall, and the right shoulder to sense appeared to be very painful. We read Science and Health, and as we gained consciousness of God's omnipotence the pain apparently left, so the child was put to bed. We tried to "be still" and know he was in Love's keeping, and he went peacefully to sleep. During the evening we asked a Christian Scientist for help, which was most lovingly given. On the second day the child played as usual, the arm being moved about without any sense of pain. He was in the best of health and carried some of his heavy toys around. About three weeks later, as there appeared to be a lump on the collar-bone, we considered it advisable to have this examined to allay our fear, so a doctor was called in. After careful examination he informed us that the collar-bone had been broken, but the bone was joined together, and that the lump was secondary to the healing of the fracture.

For this healing and many others, both mental and physical, we are truly thankful to God, and we are grateful to Mrs. Eddy for the gift of Christian Science.

Send a comment to the editors
NEXT IN THIS ISSUE
Testimony of Healing
Near the end of 1910, when I was practising for an entertainment,... 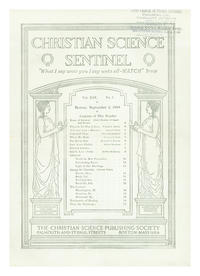