About three years ago I was afflicted with lung trouble in an...

About three years ago I was afflicted with lung trouble in an advanced stage, and also suffered greatly with nervousness. In July, 1912, I went to a sanitarium for nervous diseases, but was allowed to stay there only five weeks, as my case necessitated my being taken to a sanitarium for people with lung trouble. For months I had fever and as a result I became very weak. Then I coughed a great deal and was unable to leave my bed for many weeks. There were also various unpleasant symptoms which I would rather not recall, but according to the physician's statement both lungs were very much affected, and I had become only a shadow of my former self.

After spending about three months in the sanitarium I became acquainted with a patient who told me of Christian Science. I seemed unable to grasp at once his explanation of this religion in regard to the healing of disease, but he left with me a copy of the Herold, and upon looking it over I found an article on discouragement. This seemed to open my eyes, and I felt as if I could not read it often enough. I put aside all other reading and devoted my attention exclusively to this Herold. I may also mention that I threw away all medicines after I started with this reading, and my trust in God was so strengthened that I went to the physician and asked to be dismissed from the sanitarium. He refused to let me go, on the ground that I could not be permitted to remain in a lower altitude during that season of the year (it was November), as a change of air was fraught with danger ; that there would be no hope of cure then, and the disease would rapidly take its deadly course. I, however, insisted upon leaving the sanitarium and went home early in December. I could hardly wait to get there and share my new-found treasure with my people. From that time on I have attended the meetings in Berlin in all weathers and have never again had medical treatment ; I am entirely well.

Send a comment to the editors
NEXT IN THIS ISSUE
Testimony of Healing
Sixteen years ago I was in great distress, having suffered... 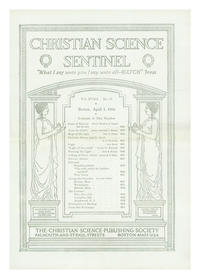