Several years ago, as I was entering Bombay harbor on...

Several years ago, as I was entering Bombay harbor on board a steamer, a little boy approached me and inquired if I had seen his father. I was not acquainted with the boy's father, but gladly consented to help in finding him; and this small incident led to my learning that "one is your Father, which is in heaven." The acquaintance with the father in question, thus happily begun through a little child, continued as the result of our staying at the same hotel in Bombay, and, becoming friendly, I often went to his room in the evening before going down to dinner. On several occasions I found the boy and his father reading from a small book. This led me to inquire what the absorbing topic was that so interested two people of such widely different ages. As a reply, the book was put into my hands with a recommendation that I should read it. This I did, and seeing from one or two days' brief and disconnected perusal of it that it promised to be interesting, I asked where I might purchase a copy for myself. I was told to go to the booksellers, so "nothing doubting" I went, and purchased at the first bookshop I entered a copy of "Science and Health with Key to the Scriptures," thus unwittingly proving the truth of that wonderful statement on page 494, "Divine Love always has met and always will meet every human need."

Losing sight of my friends shortly afterward, I made little progress in understanding the text-book of Christian Science, as I knew nothing of the method of studying it in conjunction with the Bible and the Quarterly. In the following spring, however, I went to Afghanistan, taking Science and Health with me, and there, having plenty of leisure, I read a good deal. Certainly I must have gained some understanding of its wonderful teaching, for while encamped in an orange garden enclosed by very high walls, at one end of which was a small "Zoo," I awoke one morning to hear a deal of confused shouting and the noise of men running about. On leaving my tent, I learned that a panther had escaped from his cage, and some fifty paces away I saw the animal crouching in front of an Afghan soldier, who stood immovable, with his rifle and fixed bayonet in his hands and his back to the wall. One thing stands out clearly in my mind, and that is the absence of any fear, either for my own safety or that of the man, and I laughed at the fears of the guards, who were responsible to the Amir for my immunity from harm, as I was informed. The panther was eventually induced to reenter his cage about two hundred yards away, and nobody was hurt. Since then, in reviewing the incident, the Master's words, "Nothing shall by any means hurt you," have often recurred to me. 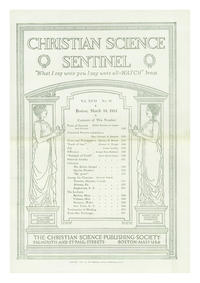