One day the writer was at work in Christian Science upon a case which mortal sense declared to be well-nigh impervious to the divine idea. Discouragement persistently suggested: "Your spiritual understanding is but a flickering spark after all. How can you hope that its feeble glow will ever warm and expand your brother's thought, and light in it that undying fire of Truth which will make him free indeed, and independent of your help and support?"

Presently the writer's attention was attracted to the fire, which had just been lighted, by the sound of a sudden collapse, and he soon saw that a spiritual lesson was being worked out among the coals. The paper and firewood had seemingly all burned out, after a brave show of crackling warmth and light; and the heavy lumps of coal, deprived of their support, had fallen, and lay all around in cold, disconnected, and irresponsive lumps. Away in one corner of the grate, however, so feeble as to be at first almost imperceptible, was a little jet of flame supported by a remnant of unburnt wood. With an intentness which apart from its spiritual significance would have been almost absurd, the writer watched this little flame, as steadily, unwaveringly, it burned on, applying its modest warmth to what was nearest to it, the unpromising bulk of a huge lump of coal. Long and persistently the flame caressed it, as if striving to liberate that which could and would unite with its inherent energy, become self-sustained, and ultimately arouse the whole mass to needed activity. Would it succeed? Could it succeed? Or must it give up, discouraged, without awaking in the dull, dark mass the least responsive sign? Presently, just above the little flame, a jet of gas sprang out, caught, flickered, died down, then increased in force and volume, and—finally—became a steady flame. 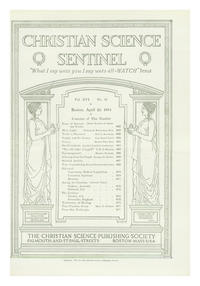