It is with the hope that my testimony may help and...

It is with the hope that my testimony may help and encourage some one else that I gratefully tell how Christian Science has healed me, physically, morally, and spiritually. Perhaps one of the most striking instances I have experienced of the physical healing occurred about a year after I began its study. I awoke early one morning, suffering from a severe pain in my side, which I recognized as an attack of appendicitis. I had no difficulty in diagnosing it as such, because I had had an exactly similar attack a few years before, on which occasion I was taken to a nursing home and three doctors thus diagnosed the case. I then suffered great pain for several days, and though I escaped an operation, I was told that the trouble was sure to return, and when it did an operation would be necessary.

Though I had several slight attacks after that, the first really severe one came, as I have already stated, after I had been studying Christian Science about a year. This attack seemed to be an exact repetition of the first one; it took place at the same time in the morning, and whenever I tried to get up I was prevented because of the pain. I am glad to say, however, that on this occasion it never occurred to me to turn for help in any other direction than to God. For about an hour the struggle was pretty severe; then the thought came to me quite clearly, that because God is the only Life, and He is man's life, neither matter nor disease could possibly affect or disturb me in any way. The moment the light of this truth shone into my consciousness all fear vanished, the pain went with it, and I was healed. I immediately got up and dressed, and have never had a return of the trouble, though seven years have elapsed since that time.

Send a comment to the editors
NEXT IN THIS ISSUE
Testimony of Healing
A deep sense of thankfulness to God, and gratitude to our... 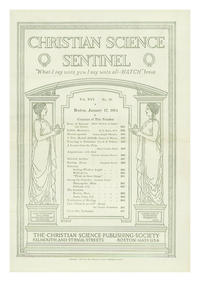