Absolutely free from debt, First Church of Christ, Scientist, on Oakland avenue, was dedicated yesterday [Nov.20], at the time when its auditorium was first occupied. The great ivory hall, seating fourteen hundred, was filled, and the announcement by the Reader that all indebtedness had been paid off, created great enthusiasm. As late as Friday there was $14.000 to be raised, and this sum was freely poured into the treasury of the organization by its members, when the situation was made known, without the individual solicitation of a cent.

The growth of the Pasadena church shows progress from the very beginning. In 1895 meetings were held in various private houses until, in October, 1897, removal was made to the G. A. R. Hall. In January, 1898, the first steps were taken to organize; at this time there were twenty-two members. The organization was completed in March, 1898.In September, 1899, the church moved to the Auditorium. A building fund was started at once, and the record of he proceedings at this time shows a high plane of scientific understanding; the foundation for the future was well laid. In April, 1902, the arrangement for the purchase of the lot on the corner of Oakland avenue and Colorado street was completed. The first chapel was built there and occupied in March, 1903; this seated two hundred and fifteen. In October, 1905, this chapel was enlarged to seat five hundred and fifty. The necessity for larger quarters soon become apparent, and in the winter of 1907 it was decided to sell the corner lot and in a more quiet location build a church that should be a permanent home. The present lot was purchased, a building committee appointed, and in November, 1908, the work of construction was begun. The corner-stone was laid March 30, 1909, and the building was finished, ready for decorators, etc., in May of the present year.—Pasadena Star. 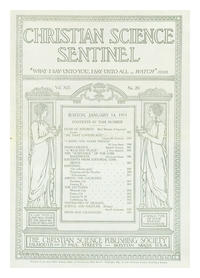