In a recent issue of the Record, a clergyman contributed...

In a recent issue of the Record, a clergyman contributed an article entitled "The Divinity of Christ," in which he took occasion to make a sneering reference to the cures accomplished through Christian Science practice. Christian Scientists will heartily agree with the clerical critic on all the good things he has said about Jesus Christ,—his spotless life, his coming in fulfilment of the prophecies, his teachings, etc., and they believe that he might have said all these things quite as faithfully and as intelligently without having gone out of his way to make a thrust at Christian Science. The gentleman should know that Christian Scientists make no boasts as to what they are able to do by way of overcoming sin and sickness, but they hold that all Christians should be able to avail themselves sufficiently of the divine power to overcome all that is unlike God. They accept not only the teachings of Jesus Christ which the clergyman has mentioned, but also that portion of his teaching which is included in the following words: "He that believeth on me, the works that I do shall he do also." "They shall lay hands on the sick, and they shall recover."

Send a comment to the editors
NEXT IN THIS ISSUE
Article
Grant me: To bruise the serpent's head (Genesis iii. 15);... 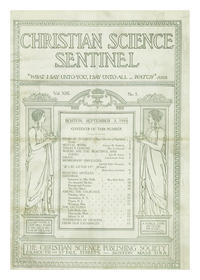