What "rivers of refreshment and wells of consolation," as some one has called them, the Psalms have been and still are to mankind. Their value is untold. It has been well said that their language has become "part of the daily life of nations, passing into their proverbs, mingling with their conversation, and used at every critical stage of existence." The whole of the Psalms may be studied with profit by every Christian Scientist. Some students may be inclined to draw the line at the imprecatory Psalms, but wholesome lessons may be drawn from these when some measure of spiritual understanding is brought to bear in their interpretation. Probably the 91st Psalm is that which appeals to us most strongly, because it seems to bespeak a very wonderful "ark of safety," where we have the assurance that we can dwell with perfect confidence in the care and keeping of divine Love. But there is unfathomable richness embedded in others, including those Psalms known as the "songs of degrees," from the 121st to the 134th. The Revised Version calls them the "songs of ascents," or literally they may be styled, "songs of pilgrimages;" and how beautifully suited they are to those who are journeying to the heavenly Zion may be understood as they are studied from the true—that is, the spiritual—standpoint.

Take the 121st: "I will lift up mine eyes unto the hills." The poetic beauty and the musical rhythm are only surpassed by the profound trust in God, the universal Father, as the protector and keeper of His children, which runs like a crimson thread through every word. This is one of the psalms that has cheered and comforted Christians in all climes and all circumstances. It was the inspiration of the Covenanters of the seventeenth century, as they worshiped on the hillsides of Scotland when dangers beset them all around. It stimulated and encouraged Bishop Hannington on his toilsome journey to Lake Victoria Nyanza, which ended in martyrdom, for he recited it as he greeted the sunrise every morning. It is the psalm that David Lavingstone read when he conducted family prayer on the morning of the day that he left his home to go out to his great work in Africa. It is part of the story of the Indian mutiny—the psalm that William Edwards found wonderfully fitted to the needs of the heroic and suffering band who for months were at death's door; and it is the psalm that saintly Francis de Sales resolved in his twentieth year to adopt as part of his "rule of life;" when midnight terrors beset him, he would remember the God who never slumbers or sleeps and who is ever near at hand. 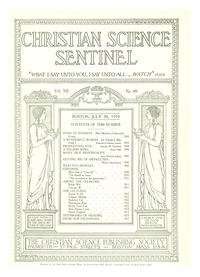