Official care of the Charles River Basin, lying mostly between Boston and Cambridge, has passed from the Charles River Basin commission to the Metropolitan Park commission. The dam, which is 1,620 feet long with approaches, providing an 85-foot roadway across its top on the harbor side and more than seven acres of park on the basin side, having a maximum width of 500 feet, with retaining walls of granite with concrete re-enforcement on pile foundations, including the lock, which has an interior length of 350 feet and width of 45 feet and a depth at mean low tide of 17 feet, cost $1,641,922.98.

Self-elimination of weak banks is a proposition which Comptroller of the Currency Murray suggests to the national banks of the country through the medium of the recent meeting of national bank examiners. A bank, he says, should go into voluntary liquidation as soon as it is demonstrated to a reasonable certainty that it cannot be continued successfully, or as soon as the examiner ascertains that the officers and directors cannot or will not manage its affairs in accordance with safe banking practices. 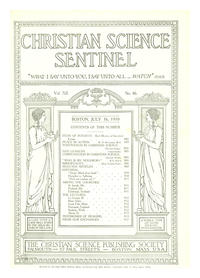