THE NEED OF UNDERSTANDING

Finally, through the pangs of discontent and unhappiness, a change takes place. Christ, Truth, knocks at the door of consciousness and calls in unmistakable tones, "Awake thou that sleepest, and arise from the dead, and Christ shall give thee light." For the first time he begins to grasp the true purport of self-denial and to put off the old man. The fallacy of blind belief appeals to him from a new and unexpected standpoint. He now sees the need of understanding, and he begins to cultivate that higher or spiritual sense which alone can lead him into the knowledge or understanding of God and His perfect spiritual creation. He learns to see and grasp things that other people do not see, in that he is looking more deeply into the realm of spiritual reality, where ideas are found to be substantial, tangible, and practical. Where others are conscious only of confusion and suffering, he is experiencing a measure of peace and comfort, because he is able to look beyond the outward or fleeting sense of things into the perfection of being. 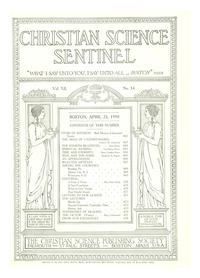