Now on sale are three new pamphlets: "Seeking and Finding," "Prayer and Healing," and "The Divine Nature." Each pamphlet contains six or eight articles that have previously appeared in the Journal, Sentinel, or Monitor; and they are particularly suitable for handing and sending to inquirers or persons who are becoming interested in Christian Science.

Hereafter, the price of all pamphlets (except "What Our Leader Says" and "Christian Science and Legislation") will be reduced to 5 cents a copy; 55 cents a dozen; $2.00 for fifty, and $3.75 for one hundred. Hereafter, also, the republication in the English language of single articles as "tracts" or "reprints" will be discontinued. It is believed that their place is better taken by the daily article on Christian Science in the Monitor and by these new pamphlets and others that may be issued. 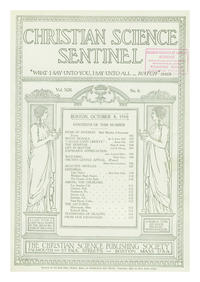