THROUGH CONFLICT TO VICTORY

Nothing cheers the true soldier so much as the knowledge that he is striving for a just cause. Neither the astuteness of the hostile officers, nor the valor, the strength, the entrenchments of the opposing army, nor the enemy's advantages of position, training, or experience can disconcert him. Never does he forget the rightness of his cause, never does he quail upon the eve of conflict, never does he falter when ordered to advance, never does he take flight when the battle is joined. His is a fight for nothing less than victory, not of personal prowess, but of right, of Principle. Neither defeat nor delay is possible; victory is inevitable.

The fact that a cause is just, that the leaders of a movement are honest in their efforts to establish rectitude, that they face opposition from established wrong, that they gladly make sacrifices of personal comfort, friends, emoluments, that they would rather have the approval of their own consciences, even though they must stand alone,—these all provoke enmity from the self-satisfied and the self-interested, but attract friends from all who love rectitude. Thus every cause based upon right, upon Principle, has produced its champion, and every champion has drawn his army; for whether the struggle has been fought with sword and bayonet or with tongue and pen, it has called for a clash between right and wrong, and right must in-evitably prevail, for right is inexorable in its demands. 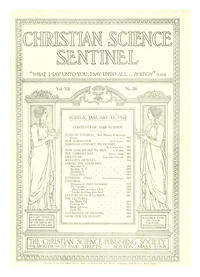