In a late issue a critic asserts that he has studied Christian Science...

In a late issue a critic asserts that he has studied Christian Science "as few Scientists ever do." In this connection it may be said that he alone understands the teachings of Christian Science who can demonstrate its rules in healing the sick and redeeming the sinner.

Our critic seeks to detract from the importance of the "works" that the Master said should follow them that believe. These works were not "the cheap exhibition of supernatural power," but were the incontrovertible evidence that Jesus was the Christ. When John sent a message to Jesus inquiring if he were the Messiah, he did not send as evidence a creed or dogma. No! He said, "Tell John what things ye have seen and heard; how that the blind see, the lame walk, the lepers are cleansed, the deaf hear, the dead are raised, to the poor the gospel is preached."

Send a comment to the editors
NEXT IN THIS ISSUE
Article
Our critic says that preachers, editors, physicians and... 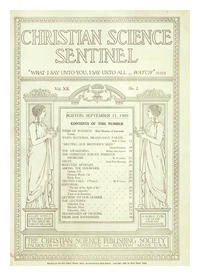