THE word "authority" often stands for the influence of a rank, character, or opinion which for given reasons is honored. More generally, however, it stands for the right and privilege of dominating opinions and exercising command, and as such it has been submitted to in all times, with little question or even thought respecting its legitimacy, the bias of education or the impulses of fear generally sufficing to render the masses contentedly subservient to an existing rule.

Nothing is more pitifully apparent to the student of history than this fact of the dominion, in long periods and over large areas, of falsity and wrong, and especially in the fields of theology and medicine. Even today, if asked for the grounds of their faith, large bodies of Christian believers would refer not to demonstrated spiritual truths, but to the decrees of councils and hierarchies, the doctrines of the fathers, the creeds of men! Even more striking, if possible, is the fact that in matters pertaining to the cause and cure of disease, the great majority of even the well-meaning and intelligent delegate to logically ludicrous beliefs and surmises the government of their own lives and the lives of those they hold most dear. Especially has the fear of legions of asserted forces and powers that have no right to be, and that in truth are not, been enthroned and suffered to rule with a rod of iron until, in illustration of Paul's statement, "To whom ye yield yourselves servants to obey, his servants ye are," the world is filled with the degradation and sorrows of an unspeakable enslavement to bacteria and drugs, and especially to fear. 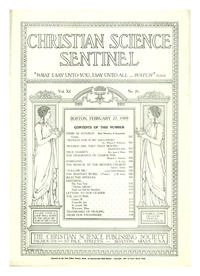