THE snowdrop, tiny flower though it be, and despite frost and snow, is the first harbinger of the coming spring. As is well known, it is the sturdiest plant, for its size, of nature's kingdom, and the tiny green shoot will be seen forcing its way upward, despite the apparently great difficulties in its way. It will overturn a piece of earth four times its size by its seeming concentration of purpose, its instinctive reaching up to the light; and in this concentration and persistence there is a lesson for the earnest Christian Scientist, who by unwavering obedience to Truth may prove the nothingness of all seeming obstacles with which error appears to obstruct his path.

The green sheath of the plant unfolds, disclosing the tiny white bell, a symbol of hope and purity, no matter what the discordant conditions around—the biting wind, the chilling frost are powerless against its steadfastness, and why? In the tiny inverted cup the warmth is preserved which is necessary to its growth; in this secret hiding-place it stores it up secure from the forces which to material sense are destructive; nor does it attempt to do more than this or to dissipate the warmth in endeavoring to alter conditions in the ice-bound world around it—rather does it faithfully do its own work, telling its glad message of life, and of hope for the coming spring. 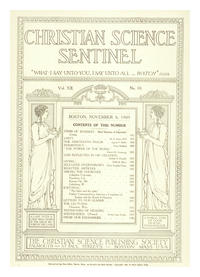