"The greatness of a nation," said Mr. Chamberlain, president of the Massachusetts board of trade, at its recent annual meeting, "rests upon its natural resources and upon the industry and intelligence as well as the patriotism of the individual citizen. Anything which tends to prevent the full expression of any one of these is contrary to the spirit of sound growth. There is a limit to a nation's capacity to yield up taxes. The nations of the world are today staggering under the burdens incident to competitive armament. This insane rivalry exhausts the natural resources and the relative strength is still maintained. Business men can be engaged in no better business than to educate the people to see the iniquity of this modern craze, in which unfortunately the United States seems to be in sympathy if not in actual competition."

A. Holland Forbes of New York and Max Fleischmann of Cincinnati won the Lahm cup for the longest flight made in a balloon under the auspices of the Aero Club of America, and also broke all speed records for long distance in a flight which began at St. Louis, Mo., and ended in Chesterfield county, Va., twenty miles south of Richmond. The distance of 731 miles was made in 19 hours, 15 minutes at an average rate of thirty-eight miles an hour. The Lahm cup has been held since October, 1907, by Captain de Forest Chandler, who covered a distance of 475 miles. 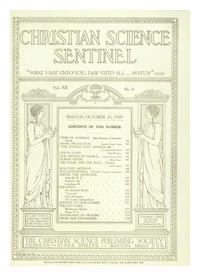