THE ever-increasing desire to know God and His ways is the hope humanity. We say "ever-increasing" because we believe there has been no time, in recent centuries at least, when there was a more sincere desire to know what God is, or a greater willingness to forsake preconceived opinions and inherited beliefs as to the person and character of the Supreme Being. Men are no longer satisfied with that concept of God which gives merely a reasonable assurance of a heaven beyond the grave to those who are found worthy. They desire to know God as a present help in every time of need, if it is possible thus to know Him. They would have present proof that they are solving life's problems aright and are so accounted worthy. The desire to know God indicates a desire for progress. A truer concept of the Supreme Being insures a higher standard of manhood. No matter how high the standard, there will always be found those who are faithfully striving to reach the desired goal. Even though the end of the journey is not reached in a day, every honest effort accomplishes something and humanity is blessed accordingly.

Theorizing as to the nature and character of the Supreme Being has not resulted in that practical concept of God which satisfies the heart and mind and creates an earnest desire to become Godlike. Theories which are not proven true may interest for a while, but they do not satisfy. Through the honest recognition of what God does, humanity gains the truer concept of what He is. Believing Him to be the cause of that for which He is in no sense responsible, or failing to recognize what He has done, has lessened human faith or prevented its development. If mortals would have more confidence in God, and experience the benefits of an increased faith, a greater reliance upon Him, they must become more correct in their conclusions as to what God does or does not do. 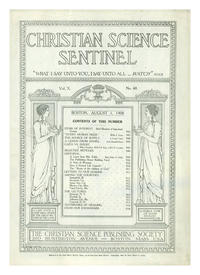