For some time past I have wished to express my gratitude...

For some time past I have wished to express my gratitude for the many benefits that I have received for myself and family through Christian Science. I would like to tell of a demonstration for me which happened while on duty at the power plant, where I have charge as engineer. About midnight on Nov. 30, 1907, I was showing the foreman how to blow out the oil burner at the boiler, when the oil exploded and came out into my face, burning me very badly, my hands being one mass of burns. I commenced at once to realize the truth of God's allness, and that there was no room for error of any kind; that God is a present help in all kinds of trouble. I then went home, and was back at my work the next morning at seven o'clock. I was advised by some friends to get a doctor for my hands; that it was a serious injury, and I was in danger of losing them. Blood-poisoning did seem to be starting, but I went to a Christian Science practitioner, and had five treatments. Had not Christian Science been my help I would have been in bed at least three weeks, but by Christmas there was no scar of any kind to show that I had been burned at all.

My wife was healed of stomach trouble, after the doctors had given her up the second time, telling her that there was nothing to do but stay in the house and wait for her death; but my wife is now well, and able to do all her housework. My daughter was also healed through Christian Science of a very bad gathering in her ears. She was healed in one treatment. We find that whenever we reflect divine Love to others, we regain an hundredfold. Christian Science, as taught by Mrs. Eddy, will bring the millennium to mankind. For these and many other blessings I am very thankful. 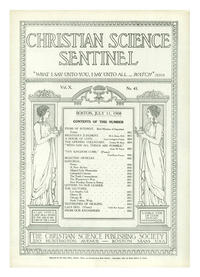