It has been well said that "it requires a philosophical mood to seek the undeterminate good," and the Christian teaching which has begotten a sense of spiritual realities as far-removed and intangible is in no small degree responsible for the fact that so-called material good, rather than spiritual, commands for the most part the world's attention. The habit of phrasing good fortune in terms of the material is very common, even among professed Christians, though Jesus' whole life and teaching was a protest against the assumption that there is such a thing as material good. When one said to him, "Good Master, what shall I do that I may inherit eternal life?" Jesus promptly rebuked the inquirer for separating the thought of good from God, even so far as to attach it to his own personality.

While all agree that that only is good which brings true happiness and peace, the quest for what men call good finds universal expression in the struggle to secure houses and lands. place and power, physical health, a bank account, etc. It is conceded that abiding satisfaction can be found only in the spiritual, yet good is constantly attached to the material in thought, and Christian Scientists are beginning to see the utter fallacy of the position. They are learning to seek "the meaning, the highest rather than the market value, of things." to use an idealist's phrase.

Send a comment to the editors
NEXT IN THIS ISSUE
Editorial
"MORE FRUIT." 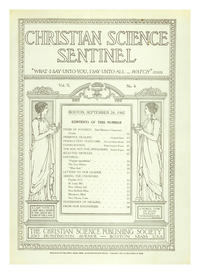