About six years ago our three children were taken very...

About six years ago our three children were taken very ill. A physician who was called in pronounced the case a dangerous throat trouble, and said our oldest boy would not live; but he did, although he was left in a terrible condition. We then decided to write to a Christian Scientist for help. When the Scientist took his case the child was helpless; he could not lift either hand to his head, nor walk, and could not even turn himself over in bed. He was unable to swallow anything, and could not speak aloud. Besides this his eyes had become distorted and he could see but little. He seemed to be near the end when, on Friday, I sent a letter to a Christian Science practitioner, which I expected he would get on Saturday afternoon.

About six o'clock Saturday evening I stood beside the bed, looking at the child, and hoping for light and help, for I knew that if a Scientist who had a clear enough understanding of the truth could treat him, he would get well I had left the bed and gone to see about the supper, when the child called out, loud and clear, "O mamma, I feel much better!" He then began to jump around on the bed and was soon speaking perfectly clear and plain. He got up early the next morning, and walked across the floor, and in about five weeks he was entirely healed; even his eyes were straight, and their natural color had returned.

Send a comment to the editors
NEXT IN THIS ISSUE
Testimony of Healing
About five years ago I had very severe attack of... 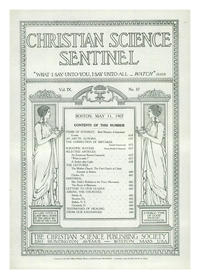