A DISPENSATION OF PROVIDENCE

In popular parlance the phrase "a dispensation of Providence" is quite frequently used in commenting on a narrow escape from some apparently impending evil; indeed its use is restricted to such things, as if God suddenly became aware that one or more of His creatures was about to suffer under His law and therefore He must temporarily set this law aside in order to avert a disaster. This interpretation of the phrase is due far less to the meaning of the word "dispense" in the sense of a bestowal of mercy or kindness, than it is to a totally erroneous conception of God by the people who use the phrase. If God were to nullify His law for a short time or for certain individuals He would be both mutable and partial; but Malachi voices God as saying, "I am the Lord, I change not," and Peter in the book of the Acts declares, "God is no respecter of persons." As these Biblical statements are accepted by all professing Christians, it is apparent that the discrepancy cannot be found in the nature of Deity; for an unchangeable, impartial God could not "dispense" in the way popularly supposed.

In his First Epistle John gives humanity the highest conception of the essential nature of God when he declares, "God is love." This is a definition which people in general have for centuries contemplated in a more or less uncertain and abstract way. Doubtless many fancy the so-called dispensations of Providence to be concrete manifestations of this abstract essence; but in so doing they are viewing God from a human standpoint and unconsciously accepting human conclusions concerning Him. The fact becomes evident, with even a little thought, that because God is Love, unchangeable, impartial, the creator and sustainer of all, therefore His very nature is manifested to every one of His creatures, and were it not for the overwhelming weight of untruth accepted by even professing Christians, this would be manifested as a continuous dispensation of good; for God is "of purer eyes than to behold evil." 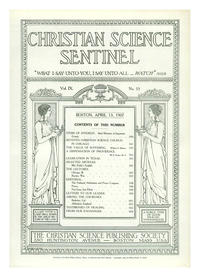