Heretofore I seemed to have been hindered from sending...

Heretofore I seemed to have been hindered from sending in a written statement of my experience in Christian Science and of my gratitude for what it has done for me. I knew of Science for years and admitted the good done others, but it was necessary for me to realize, through personal suffering, that I must seek some higher power than the human mind that I might be permanently healed of the cigarette habit. I turned to Christian Science and by telephone engaged absent treatment for a week. To my delight the first treatment destroyed all desire for smoking and very soon the nervousness left me. This experience occurred a year ago, and never since have I had the desire for tobacco in any of its forms.

At the time that the foregoing demonstration was made it was not my intention to become further interested in the subject of Christian Science, but on the advice of my practitioner I started in to read "Science and Health with Key to the Scriptures" by Mrs. Eddy. The book appealed to me, because I realized that it contained exactly what I needed and wanted, and at once I became an earnest and eager student of Christian Science. The moral change which occurred within the first two months was something remarkable, for unconsciously I dropped the use of profane and vulgar language, lost a violent temper, quit drinking, and realized that the excitement and pleasures of the world failed to attract me. Christian Science has done much for me physically. For years I had had stomach and liver complaint. Relief from these has been slow, but very marked indeed. I also wore glasses for ten years, but shortly after coming into science laid them off. From the time that this demonstration was made I began to have perfect eyesight, and it has remained ever since. The destruction of much fear, through Science, has brought about a more harmonious condition of health than I experience in the old thought. Before coming into Science I was a worldly young man, caring nothing for God or for church work. but now I consider it a pleasure and a privilege to attend our church services and it is my desire to know more and more about God.

Send a comment to the editors
NEXT IN THIS ISSUE
Testimony of Healing
Being reared by Christian parents, who taught me to... 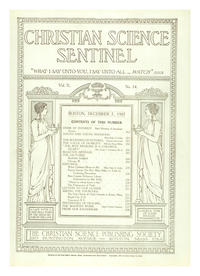