Your correspondent is evidently not well acquainted with...

Your correspondent is evidently not well acquainted with the Christian Science movement, else he would realize that many of its adherents have been born and bred in homes which he would himself designate as "religious," though it is true that "very vague ideas about religion" are often to be met with in these homes. The writer, having made a close study of Christian Science for some years, is intimately acquainted with the movement, and is personally acquainted with a large number of its adherents. During this time she has observed that Christian Science is for "all nations and all kindreds:" for those who are hungry, thirsty, strangers, in prison, and sick; that it embraces all ranks and conditions of society, from the highest to the lowest, from the intellectual and scholarly to those whose simple faith, untrammeled by "the wisdom of men," has led them into the understanding of this new-old truth.

Among Christian Scientists are to be found clergymen of the Church of England, who have given up their preferment in order to work in the "good pastures;" the wives and daughters of clergy, who were familiar with the letter of the Bible; men, once public schoolboys, who were duly prepared for confirmation and confirmed, who have regularly studied Divinity while at school, and who have attended chapel daily for many years; university men, who have attended chapel daily during their early manhood. How comes it that all these have strayed? Have they strayed? Are they heretics, or have they found the "green pastures" of which David spoke when he wrote the 23d Psalm? The writer for seven years of her girlhood was brought up in the homes of three different clergymen of the Church of England, and was duly instructed by them; but later her thought dwelt, year by year, upon the promises of Jesus, and nowhere did she see them fulfilled. Her eye constantly scanned the Bible page, and she searched the Revelation of John, but never, until she became a student of Christian Science, did she see the promise of Jesus fulfilled, or obtain any of the "light" for which she had been longing. How comes it that so many whose upbringing has been distinctly religious have been left so starved in mind and often sick in body? Is it reasonable to suppose that such people—thinking people—should for one moment be satisfied to "base their theories upon ignorant statements about the Almighty"? Upon the other hand, what statement could disclose a greater ignorance, i.e., absence of knowledge, than that made repeatedly to the writer (and to many another earnest seeker after that knowledge which Jesus himself said "is life eternal") by educated churchmen, viz.,—"We cannot know these things, we must have faith"?

Send a comment to the editors
NEXT IN THIS ISSUE
Article
In your issue of Dec. 28, under the caption "Matter,... 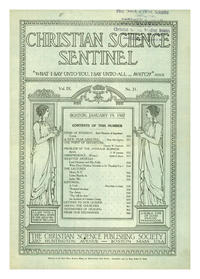