One hundred and ninety-three days after it sailed from Solomon's Island. Chesapeake Bay, the great dry dock Dewey arrived at Olongapo, P. I., having finished its voyage of more than twelve thousand miles with an average speed of one hundred miles a day for the time it was in tow. Twice the dock broke away from its convoys and was in serious danger, once off the Canaries in February and again in the Mediterranean in April. After leaving Solomon's Island on Dec. 28, 1905, the Dewey was first sighted off the Bermudas on Jan. 5, 1906. It reached Las Palmas, Canary Islands, on Feb. 23, where it was obliged to remain for repairs until March 18. It passed Malta on April 4, Port Said April 18, Colombo June 5, Sabang June 13, and Singapore eight days later, arriving at the naval station at Olongapo July 10.

The appropriation this year for the Agricultural Department, enabling it to do the thousand and one things that come under its supervision, is $9,882,690. In 1897 the appropriation was only two and one-half million dollars. More than six thousand persons are now on the rolls of the department, and of this number about three thousand are rated as scientists and scientists' assistants. Nine years ago only about two thousand persons were employed, of which number only about nine hundred were scientists or scientists' assistants. 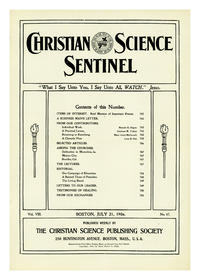