The Lodge amendment to the Hepburn rate bill will, if adopted, include all pipe lines in the provisions of the Interstate Commerce law, and make these lines, whether owned by the Standard Oil Company or others, common carriers. Senator Lodge is of the opinion that the owners of these pipe lines enjoy special privileges which should bring them under the control of the Interstate Commerce law, since their owners are compelled to operate under franchises to acquire the right to cross public highways, and in some States exercise the right of eminent domain.

It is thought that new indictments of the beef packers as individuals are to be asked from the Federal Grand Jury, which has been summoned to appear on Tuesday, May 15. Judge Humphrey, in the Circuit Court, recently decided that the packers cannot be held as individuals on any evidence which formed a part of the information given by them to Commissioner of Corporations Garfield. In order to make the immunity plea impossible, secret service men are said to have been gathering evidence since that investigation. 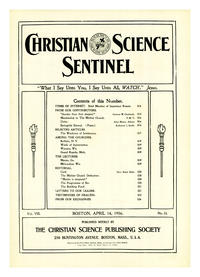