A CAREFUL reading of the books of the Pentateuch, where-in the history of the children of Israel in their bondage and in their wanderings is chronicled, brings to thought the utter helplessness which would have been the heritage of these unfortunate people had not Moses been saved and reared in their midst. Born into conditions which were waiting to destroy him, rescued through remarkable circumstances and cherished under royal protection, he became to his own suffering people a leader whose God-sustained purpose opened the way for a full deliverance from the literal slavery of their lot. Moses withstood Pharaoh, urged his people on in the way of the guiding pillar of fire and cloud, brought them through the Red Sea, helped them to find bread and water in the wilderness, formulated for them their laws and their commandments, and defined for them their practices and customs. To God alone they must look, upon God alone they must depend, and nothing less than the power of God wrought out their salvation from day to day ; but the law of God must be declared in ways appreciable to their limited human capacity, ere it could become available for the sore need of the nation. Hence the necessity for Moses, and for obedience to his instruction. What the people themselves could not do, in throwing off the yoke of their oppressor, and in making their way to the promised land, one enlightened prophet could do, for and with them. God had been the same God, eternal and unchanging, during all the four hundred and thirty years of the sojourn in Egypt, but the divine law which makes possible victory over evil conditions, was not recognized as operating in behalf of this downtrodden people until a Moses stood forth to define that law and to establish its activity in human affairs. 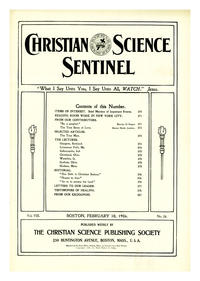