THE PERMANENCE OF UNSEEN THINGS

The professing Christian is frequently perturbed by the seeming victories in arguments of atheists and agnostics. When the line of reasoning is particularly astute and its fallacies not apparent, he may be tempted to abandon his own ground and sally forth—only to meet discomfiture. Usually these discomfitures are due to the unfamiliar weapons with which the believer tries to fight. Instead of iterating David's declaration to Goliath, "I come to thee in the name of the Lord of hosts . . . whom thou hast defied," he cumbers himself—as David refused to be cumbered—with material armor. Unwittingly he casts aside his all-adequate spiritual mail, forsakes his spiritual stronghold, and tries to vanquish the foe on, to him, an uncharted battlefield and with pointless weapons,—those furnished by sense testimony. By taking such a course he forgets that "the weapons of our warfare are not carnal, but mighty through God to the pulling down of strong holds." 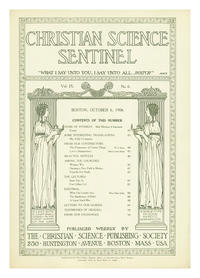