with contributions from William B. Johnson, Mary Baker G. Eddy

A letter in this article was later republished in&nbsp;The First Church of Christ, Scientist, and Miscellany:&nbsp;My. 172:23-29

A large audience was assembled in Symphony Hall when the annual meeting was called to order at 2 p.m. by the President, Mr. Edward P. Bates. After the singing of our Leader's hymn, "Shepherd, show me how to go," the 91st Psalm was read, also a selection from Science and Health on page 275, lines 9 to 23, which was followed by silent prayer and the Lord's Prayer. The following telegram to our Leader was unanimously adopted and ordered sent to her. 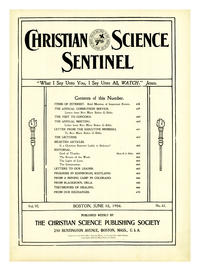