Such is the nature of every metaphysical truth that when it is superficially studied it excites doubt, and may even seem to be self-contradictory and absurd; but when thoroughly weighed and tested it dispels doubt and converts the apparent self-contradictions and absurdities into additional proofs of its trustworthiness; and this for the reason that all true philosophy can never be found at fault in the slightest particular when the square and compass of pure logic are applied to it. The tests we are quite likely to apply to a philosophical or metaphysical proposition, when we approach it in a superficial way, are not the square and compass of pure logic, but, on the contrary, they are tests which are a compound of ideas and habits of thinking that have come to us largely through the deceptive avenue of our physical senses.

A straight line may seem crooked when viewed through a distorting medium, and such a medium is human prejudice which warps and perverts well-nigh every good and beautiful thing. It is the experience of every reader of the Christian Science text-book that many of its statements seem, at the first reading at least, to be enigmatical, and some of them perhaps self-contradictory. If the reader take up the text-book as a hostile critic this result is quite sure to follow, and he may be led to close his inquiry and possibly become yet more hostile. 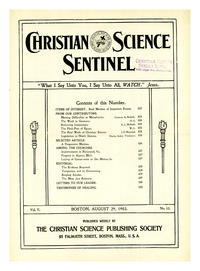